You probably can’t tell that I’m excited, but I’M EXCITED. Me?? Actually committing to something and finishing it??? NEARLY UNHEARD OF????

I’m just SO SO proud of myself for finally finishing a novel. It’s not good, definitely not. But the important thing is that I COMPLETED it and actually proved to myself that I could do it!!!

Near the end of the month, I was writing almost 2K daily (except for Day 27 because I got tired), which was pretty cool imo?? I didn’t feel that tired tbh, but I did run out of time to do other things.

THINGS I LEARNED FROM THIS YEAR’S NANO:

So, after completing NaNo at 50K, I took a break from even LOOKING at my document… until the fated day of December 9th.

That Saturday, I realized that I would be posting a Writerly Update soon, and because saying “I won NaNo at 50K words!!” is cool, saying “I WON NANO AND ALSO FINISHED MY FIRST WIP EVER!!!!” is even COOLER.

But!! I finished my novel yesterday with 53.6K words (at night, which was why I wasn’t jumping up and down), and I am SO SO HAPPY AND PROUD AND EXHAUSTED. This trash novel is finally over, and now I can take a break from it until January. SOUNDS LIKE HEAVEN.

Tbh, finishing a novel is the best feeling. Knowing something that you’ve labored over for a long time is now COMPLETE is just so… amazing?? My tired brain was unable to really digest that I actually finished writing my first (short & trashy) novel ever, but as I’m writing this post, I feel so much more accomplished.

I mean, the end is rushed. The middle scenes are a mess. Nothing lines up. It’s so slow. Nothing happens. The beginning is boring. Everything is boring. There is too much repetition.

I’m really obsessive about making plans because it makes me look and feel organized when I’m actually not that organized. It also gives me a goal and since I’m SUPER COMPETITIVE, it works well.

Set aside GG & relax!! Aka NOT WRITE AT ALL. Because I’m absolutely exhausted from writing and I just want to do go a month without anything related to my writing. (Except for poetry because I can tell that I’m getting less inspired with that and NO.)

Start brainstorming again. I “brainstormed” during September, but it was horrible and I had no plot. So THIS TIME, in order for me to be SUCCESSFUL, I’m going to be coming up with an actual plot & character arcs. Because planning this time sucked.

Finish brainstorming & start outlining?? My outline was absolute TRASH because it didn’t exist, which really made me suffer in NaNo. I NEEEEEED a detailed outline, so I’m hoping to start on it in February!

Finish outlining!!! Like I said, I NEED an outline, so I’m putting a lot of focus into that. I’m thinking around 15K will be enough, maybe a little less?? I also want to leave a little room for fun things like AESTHETIC BOARDS, but probably not because #procrastination.

Rewrite the WHOLE thing for Camp NaNo. I honestly don’t know if I’ll have the motivation to rewrite the whole novel, especially because Camp NaNo is definitely not the same as NaNo and therefore not as motivational, but I’m REALLY hoping to. So that I can finally set this aside* and turn to other story ideas I have.

Nothing here, you idiot. I’m not that obsessive with planning.

*Well, not completely. Because I’m planning on entering the 9K – 14K of this in the writing contest I’ve won for the last two years. Am I annoying? Yes.

Again, as I’ve yelled at you a million times before: These are all unedited. Even these ones, the “best” parts of the novel that I’m semi-comfortable with sharing.

Also these are literally the only funny parts in my novel??? Where has my sass gone??

NIKO BEING A SMART ALECK

this was my way of getting a lot of words during nano, i’m really smart

Also can we really quickly appreciate the stupidity of this snippet:

You’ll never believe what else I’ve been writing,,, even though I said it in the title of this post AND the heading of this section,,, it’s just such a surprise??

My poems have finally become poems that I think I’ll be proud of when I look back on them a few years from now, instead of cringing at them?? I mean, currently, I haven’t had much inspiration, BUT STILL.

Poetry is even more nerve-wracking for me to share, because it comes from a place deeper than my stories do??? So there will only be snippets from separate poems (instead of whole poems because that’s too much commitment for me). 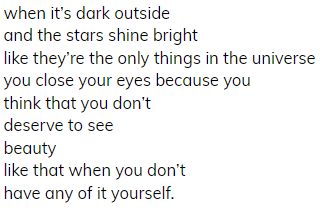 how did nano go for you?? did you win? (of course you did) have you finished a WIP yet? what have you learned from nano? do you write poems?? what are your future writing plans? and most importantly, HOW ARE YOU???

p.s. i’m super sorry to not be posting a lot this month, but i have exams starting tomorrow, friday, monday, and tuesday. so i’ll be taking off saturday to study, and to also catch up with y’all’s posts & comments! love y’all!!!

p.p.s. i also don’t know what to post on saturday so there’s that