I am very nervous today because I’m… introducing my WIP???

Some people have actually been asking me if I’ve done an introductory post to it yet (since I’ve mentioned my WIP a couple of times now) so uh here you go? I’m honestly really flattered you want to know about my WIP!!

Anyways, I haven’t done a Writerly Update™ in so long and frankly it’s because I just don’t write as much as I used to, but NaNoWriMo is happening next month, a WIP has been in the works for months now, and I’m finally ready to share my WIP with you all! So here it is and I hope it sounds vaguely interesting at least??

WHAT’S MY WIP ABOUT?

Summary: A twin girl named Mali is caught by a water spirit assassin, but she turns out to be the wrong twin. Obviously, she lives (I mean if she didn’t, there would… be no book), and she ends up helping the water spirit assassin, Nahla, try to find her missing twin. But what Nahla doesn’t know is that Mali is an assassin* too, and Nahla is her target.

Themes: I’m big on writing a lot of themes into books, so some of the themes I’m hoping to write about in this WIP is making peace with yourself and your past, finding comfort even where you don’t think it’ll be, and being content with who you are.

*Okay she’s not TECHNICALLY an assassin but let me live.

CHARACTERS WHO I WOULD DIE FOR

Here are the main characters of my WIP!! I’m lowkey questioning if I talked too much about them but also?? who cares. I love them and I’ll talk about them forever. Also am I sorry for comparing them to Six of Crows and Foxhole Court characters? No.

And I DO have a character aesthetic… but only one. I’ll show it later but they take fOREver for me to make so that’s why there’s only one!!!

VERY reserved, cold, witty, distrustful, protective, loyal, vengeful, manipulative, clever – Thai (like me!) – demi bisexual (also like me!) – Slytherin – she/her – has depression (like me!) – a bit of Kaz Brekker and Andrew Minyard

(I know she’s a bit of a YA cliche but first of all, she’s the FEMALE counterpart to all the male characters in YA who are like this, and second of all, I love this type of character with my whole heart and no amount of shame will EVER make me hate it)

fierce, loyal, used to be softer but something made her tough yes I know it’s cliche, sarcastic, determined, does anything for loved ones – Moroccan – lesbian – Gryffindor – she/her – lowkey Dan Wilds

So the only snippets I really have are from a scene I wrote last month because I was very excited about it, what I wrote while planning, and my outline (which is basically non-existent).

Here’s the one I shared in my September recap:

Here’s another snippet from the same scene, but took place a little earlier:

Here’s a snippet from the very very early stages of planning that I still relate to:

And here’s a snippet from my outline! I wouldn’t have shared it but I love my snarky Mali so :’)

Uh so I have like… zero aesthetics because I’m trying not to distract myself by going on Pinterest and they always take me SO LONG to make! I do have two that I’ll share though:

This one is the one I always reuse, but is kinda inaccurate because I made it at the very beginning of my planning and only did it based off of setting. Also I just realized two of the images are the same I love how smart Past May is.)

And this one is a character aesthetic for Mali that took me two hours to make!!!! But I’m very proud of it and the fact that I manged to find images that actually related to who she is. 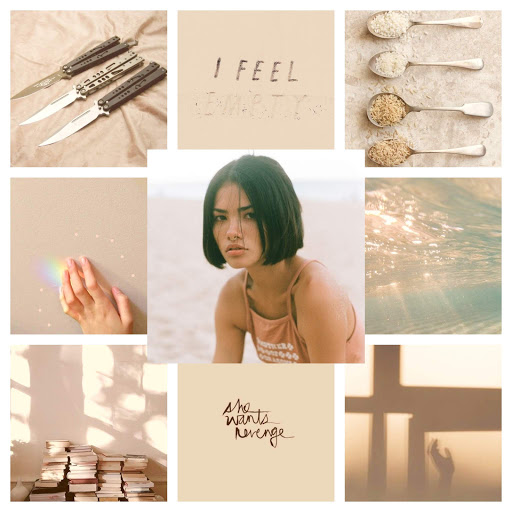 (I took these images off of Pinterest and edited them all, so because I’m paranoid, here are the links to all the original images on Pinterest: girl, water, books, rice, hand shadow, knives, rainbow hand, revenge, empty)

I’ve been having a really rough time with planning out this WIP because I’m 1) horrible at plot and 2) I haven’t planned/written a proper WIP in SO long. So I had to turn to some resources, and I always find it helpful whenever a writer shares a list of resources they used, so… here’s mine???

(THESE RESOURCES ARE VERY BASIC OKAY DON’T SHAME ME.)

are you working on a WIP? if so, what’s it about? or do you write something else? are you participating in NaNoWriMo? how long does it take for you to make aesthetics??? and does anyone want to make one for me??

58 thoughts on “Writerly Update (My First in Forever??): Introducing My WIP and Characters!! Featuring Snippets! Aesthetics! A Mess!!”