There are always books that you can’t describe your feelings about.

This book is one of those, times ten.

Literally whenever I think about this book, it’s a jumbled mess of ?!!??!?!?!??!?!?!??? Because I know that I overall enjoyed it, but my brain just doesn’t know how to feel, because this book made me feel WAY TOO MUCH.

But I’m so glad I got to read this book anyways, because it’s definitely the most emotionally disjointing book I’ve ever read and honestly? That was an Experience.

EMPRESS OF ALL SEASONS

In a palace of illusions, nothing is what it seems.

Each generation, a competition is held to find the next empress of Honoku. The rules are simple. Survive the palace’s enchanted seasonal rooms. Conquer Winter, Spring, Summer, and Fall. Marry the prince. All are eligible to compete—all except yōkai, supernatural monsters and spirits whom the human emperor is determined to enslave and destroy.

Mari has spent a lifetime training to become empress. Winning should be easy. And it would be, if she weren’t hiding a dangerous secret. Mari is a yōkai with the ability to transform into a terrifying monster. If discovered, her life will be forfeit. As she struggles to keep her true identity hidden, Mari’s fate collides with that of Taro, the prince who has no desire to inherit the imperial throne, and Akira, a half-human, half-yōkai outcast.

Torn between duty and love, loyalty and betrayal, vengeance and forgiveness, the choices of Mari, Taro, and Akira will decide the fate of Honoku in this beautifully written, edge-of-your-seat YA fantasy.

Thank you to HMH Teen for a copy of the book in exchange for an honest review! This did not affect my opinion in any way.

“But not every happily-ever-after includes a man.”

Empress of All Seasons is set in a Japanese-inspired world where every time the prince is in need of a wife, competitions to the death are held for all women—except yōkai.

Mari, a yōkai, has trained all her life to enter this competition, and refuses to back down until she becomes empress. Taro, the prince, has no plans whatsoever of becoming emperor. And Akira, half-yōkai, half-human, who has only ever wanted to be with Mari.

The beginning started off strong; I really loved it and I was intrigued by where it was headed. Having three main characters and POVs, I was excited to see how all the characters would meet and how their paths would intertwine. 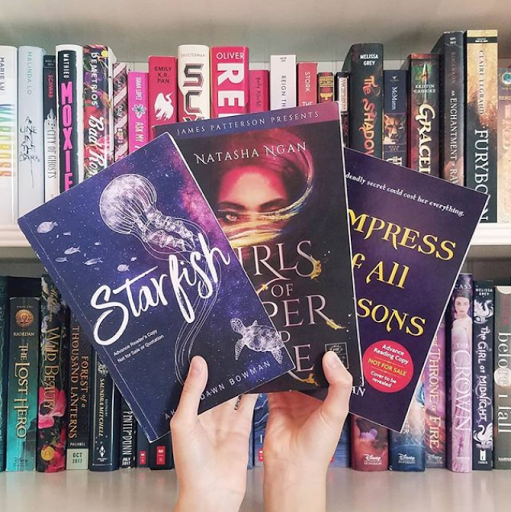 One of the most beautiful things about this book, however, is how delightfully feminist it is. Mari is part of a group of yōkai termed the Animal Wives, who seduce men into marrying them before stealing their riches. All the women are feminine and take pride in it, and are so strong, both physically and mentally.

And not only was there themes of feminism, but also of loyalty, honor, and oppression. The yōkai have been enslaved by emperors for decades, and as one of them, Mari is so loyal to them and feels the hurt they feel. This story of the oppressed overcoming their oppressors is so strong and relevant today.

Another thing that really stuck out to me was the Japanese mythology that was interspersed throughout the novel. It gave you insight into how this world was made the way it was, and why people were made the way it was. Those chapters were some of my favorites to read, because they were just absolutely beautifully written.

The biggest thing that I will remember about this book, though, is how many emotions it made me feel. Mixed in with the expected feelings of enjoyment and intrigue from a 3.5-star read, I was frustrated, angry, upset, confused, shocked, and surprised. To describe my feelings as a whole about this book? I would say I was just absolutely discombobulated. And I still have no idea if it was in a good or bad way.

A reminder of the coldness and violence that hate begets. Winter would always be for regrets.

Unfortunately, what really made me drop a lot of stars was the amount of insta-love there was in this book. The romance was so frustratingly cringy, and it made me want to scream. They’d known each other for four days… and she hit him in the face… and somehow his life’s plans are uprooted and he completely changes his mind and they’re convinced they’re true loves? WHAT. Straight people are wild.

On top of that, my favorite character at the beginning of the book, Taro, turned out to be a complete jerk and I hated it? He acted so entitled and rude and I constantly wanted to punch him. I have no idea what was done to his character or why it happened but I just downright hated him at the end. 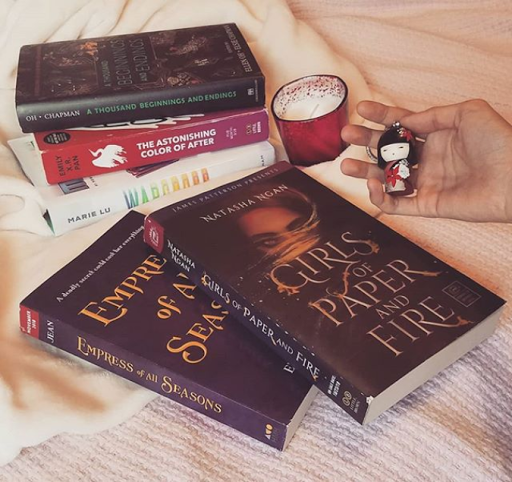 Pacing in general was also really off. The beginning and middle was slow, and then the end was all just a fast blur. And the way the book concluded as well was just… way too quickly. It was basically a 2-page epilogue describing what could have been the plot of a second book. I genuinely thought there was going to be a sequel, until that poorly done wrapup.

That said, overall, I enjoyed this book! It was fun to experience all the emotions I did. The plot and concepts are super unique, and while it may take you time to warm up to characters (or fall in love with characters you end up hating), I think it’s definitely worth picking up!

are you planning on reading this book? what books with mythology do you rec? have you ever loved a character at first but then hated them by the end of the book?? chat with me!!!

33 thoughts on “ARC Review: Empress of All Seasons by Emiko Jean // I Have Never Felt More Emotionally Disjointed by a Book”