That’s it. That’s my review. That’s pretty much all you need to know to pick this book up. That, and also the fact that it’s written with some of the most gorgeous prose ever and it made me cry and has an absolutely stunning cover.

I don’t think I’d ever read a YA gays in space book until now, and I have to say… it was everything I was looking for. Sure, most of the book took place on Earth, and sure, the gay was very slowburn, but did I adore it completely despite that?? (Yes.)

I’m a little late in posting my book review (prioritizing school and my health!!) and the book published two weeks ago, but I hope I manage to convince you all to pick up a copy whenever you can, because it is absolutely worth it!!

THE WEIGHT OF THE STARS

Ryann Bird dreams of traveling across the stars. But a career in space isn’t an option for a girl who lives in a trailer park on the wrong side of town. So Ryann becomes her circumstances and settles for acting out and skipping school to hang out with her delinquent friends.

One day she meets Alexandria: a furious loner who spurns Ryann’s offer of friendship. After a horrific accident leaves Alexandria with a broken arm, the two misfits are brought together despite themselves—and Ryann learns her secret: Alexandria’s mother is an astronaut who volunteered for a one-way trip to the edge of the solar system.

Every night without fail, Alexandria waits to catch radio signals from her mother. And its up to Ryann to lift her onto the roof day after day until the silence between them grows into friendship, and eventually something more . . .

In K. Ancrum’s signature poetic style, this slow-burn romance will have you savoring every page.

Thank you to Macmillan for a copy of this book in exchange for an honest review! This did not affect my opinion in any way.

All quotes are from an advanced copy and may differ in final publication.

I was just looking for a good time and instead I ended up crying myself to sleep at 1am because of this book, and K Ancrum knows exactly what she’s done and I know she’s out there smiling to herself!!!

The Weight of the Stars is about a girl named Ryann, who is struggling through her last year of high school while having to take care of her brother and his son. Alexandria is new to town, and she instantly intrigues Ryann, to the point where it gets her in trouble.

But there is more to Alexandria than what Ryann initially thought, and their flat-out hostility towards each other transforms into friendship and later romance.

At the surface, this book is about these two girls, but beneath that, there are underlying themes of what your place in the world is, taking opportunities you never thought you’d get because of who you are, and loving unconditionally—your friends, your family, your romantic partner, and yourself.

“Four light-years from the second largest pulsar, past the black dust and the white. In a small circle of golden light, made by a careful teenage star, I found you […] No matter what I did or said, there you stood. Like a fixed point, and the Earth moved around you.”

I can’t think of any other way to start this review off than by saying: This book is absolutely stunning. There’s truly something special about the way K Ancrum writes; it’s simply and subtly beautiful, without any flourishes or embellishments. It’s as if she’s put in no effort at all and yet somehow the most gorgeous lines have stemmed from her mind. 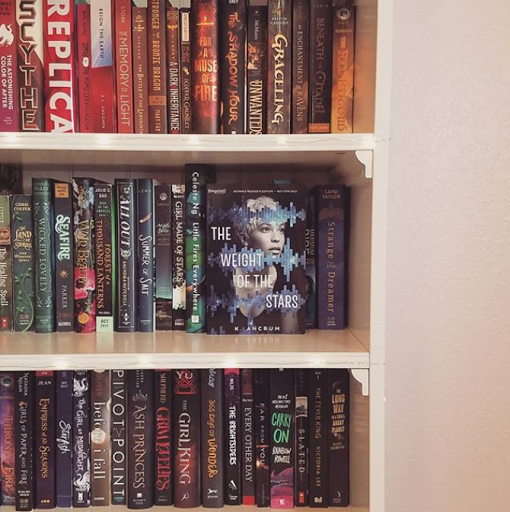 From the very beginning of this book, you could tell that it was going to be 1) a tearjerker, 2) beautifully written, and 3) impossible to put down. And it was all of those things and more.

One of the strongest points in this book is the cast of characters. They are all so endearing and written in such a complex way, and I easily fell in love with them. One of my favorite tropes of all time is the found family trope, and the found family in this was so intriguing and lovable.

And not only is there found family, but there is blood family as well, specifically between siblings. The love between Ryann and James? So, so beautiful. There’s one scene in particular that made me cry because of how much I felt for Ryann as an older sister myself, and I think their relationship was portrayed beautifully.

Love is not about holding people where you want them. It is about doing what’s best for them because you need them to be okay.

✦ Ryann: beautiful black butch lesbian, who loves her friends and family fiercely and would do just about anything for them. in love with space and the idea of being able to travel across it. seems tough and rough but also just very soft
✦ Alexandria: new girl in town whose mother went on a one-way trip in space and has been lonely her whole life, catching radio signals from her mother every night. irritable to Ryann at first but then becoming something more
✦ James: Ryann’s brother whose trauma caused him to stop speaking. he has a beautiful little baby that he is an amazing father to
✦ Ahmed: Ryann’s best friend, who is the Sikh son of three parents in a polyamorous relationship (if you’ve read The Wicker King…you know who they are!!!)
✦ Shannon: the traditionally popular girl that shouldn’t fit in this little band of misfits but somehow does anyway
✦ Tomas and Blake: I don’t remember these two particularly well but they were cool (look I’m sorry I have horrible memory)

“You looked like… the whole world was built just so that you could walk on it. Who could look away from that? Who would want to?”

And of course, the romance in this book is no less beautiful than everything else. I loved Ryann and Alexandria’s relationship so much to the point that it made me cry. The way they found each other and learned to let each other go, the way they helped each other learn how to heal, the way they gave a piece of their heart to each other without even knowing—all of it was absolutely beautiful and heartwrenching. 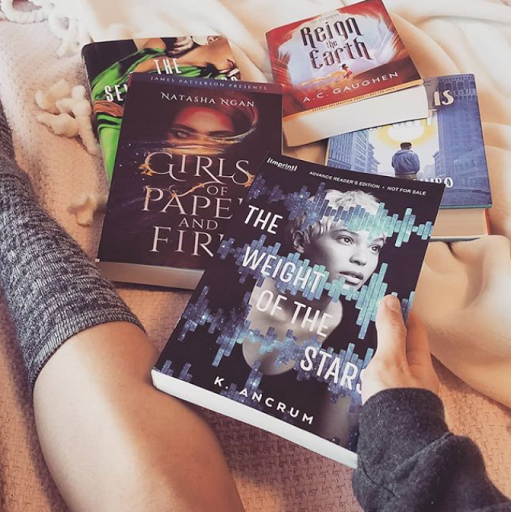 There is also another romance featured in this book that was just so powerful, the one shown between Alexandria’s mom and dad in the form of transcripts. God, my heart broke over and over for them, and I was full-on sobbing at one point because of how much it hurt to read their story, however brilliantly it was written.

Unsurprisingly, the space aspect was another huge reason why I fell in love with this book. Just like any other gay out there, I have a slight infatuation with space and the idea of millions of stars and galaxies out there, though sometimes the sheer size of it makes me dizzy.

The way space is written in this book is mildly terrifying, but also wholly beautiful. It’s a place to get lost in yet also to find yourself, whether in its glorious beauty or its vast emptiness. Reading about space in the way K Ancrum had described it made me feel this sense of calmness, the knowledge (or belief) there are a million worlds out there and here I am, existing on this one.

The only reason I docked off a half star was because in the beginning, I didn’t really connect to the book and characters as much. The amount of my love for the rest of the book made me realize that the beginning wasn’t that great for me!

I truly believe that this book is a book everyone can find something to love in. It’s a contemporary with that little dash of magic that always accompanies the idea of space. It’s a story of love in all its forms—platonic, familial, romantic, and even self-love.

Most of all, though, it’s the beautiful narrative of a girl who didn’t fight for herself until the last moment, and the people who helped her see it was okay to stand for herself, and the girl who promised she would come for her and she did.

(And of course, GAYS IN SPACE.)

have you gotten a chance to read this book yet? if not, do you plan on it? any gays in space books you can recommend me?? or any good SPACE books in general???

34 thoughts on “ARC Review: The Weight of the Stars by K Ancrum // The Beautifully Written Gays in Space Book that Made Me Cry!!!”