I’ve been wanting to do this post FOREVER now, that I’ve finally just decided to go ahead and do it!!

A while back in a post, I mentioned possibly making a webcomic recommendations list, and there were a surprising amount of people interested in it. So I thought, “Why not!”, drafted this post… and never published it. I was waiting for a time when I could read more webcomics to add to this list but that never happened.

I’ve actually only read a small amount of webcomics (about 20 total, so I’m recommending basically just half of the ones I’ve read lmao), but it’s a lot compared to your regular average YA reader. And I’ve been asked for recommendations before, so honestly just why not make a whole post and share some of my favorites!

Disclaimer: Some of these are fairly popular webcomics, so it might not be very helpful to the more seasoned webcomic reader, but this post is aimed at those who are new(er) to them, since that seems to be the majority of the people who asked for this post!!

FIRST: WHAT ARE WEBCOMICS?

Webcomics are as simple as their name: comics that are published online. The most popular webcomics site is Webtoons, but you can also find some on Tapas, Tumblr, and sites that the authors specifically create for the comic.

Webcomics work really well for me because I’m a super visual person, and seeing the story drawn out is so satisfying for me. Some webcomic art out there is truly gorgeous, so if you’re like me, then I definitely recommend trying them out! Plus, they’re so easy to become obsessed over, and I think being able to see the characters visually represented presents a new form of connection to them and their story.

I definitely recommend reading webcomics if you want a new, more visual form of media, and if you want to keep yourself entertained but still doing “reading”! I also read them when I’m slumping and can’t read regular prose. (I also thought that they could help me quickly catch up on my Goodreads challenge, but that’s wrong because some webcomics are super long.)

This is my favorite webcomic of all time, and it actually was one of my favorite books last year. I just!! love it so much!!! It feels like actual magic, and it’s just the softest story of a found family in space and a girl trying to find the girl she loves. The art is gorgeous, and I felt so connected to the characters and the story.

It’s available in a graphic novel version, if that’s something that interests you, though it’s definitely longer than most graphic novels. But I recommend this one with my whole heart, it’s absolutely breathtaking.

Sadly my memory is failing me in what exactly this webcomic was about, but I do remember that it’s about the zombie apocalpyse, and a found family trying to survive it! It’s so wonderfully diverse (POC rep, queer rep, polyam rep, disability rep), which I loved so so much.

The tone and writing makes the story seem a lot more lighthearted and fun, even though it talks about……the zombie apocalypse. The characters are so lovable, and the story is just heartfelt as well! I just!! don’t know exactly how to describe it; I love it a lot and it has a special place in my heart! The story is told so well and in such an enjoyable way.

RECOMMEND TO: fans of found family, fans of The Gays, those looking for a fun story!!

Okay, so you could argue that the style of this isn’t really anime/manga, but I don’t usually like anything drawn in an anime/manga style (because of internalized things regarding the fetishization of Asians because of Asian media like anime/manga)—but I REALLY love this one. Every episode is so enjoyable and addicting to read.

It’s about a girl, Lucy, trying to figure out who cooked a meal she distinctly remembers from years ago, but it involves multiple chefs who had a bad falling-out. It has mystery elements, but it’s also very much a character-driven story. And you thought food descriptions in books were bad? Just wait until you see the food ART in this. Also the romance is so slowburn and I love it so much.

This webcomic is a pretty popular one, but I think it’s a great start for those who haven’t really read any yet! It’s a Hades x Persephone retelling and GOD I LOVE IT. There’s something so addicting and enthralling about it, besides the fact that the art is absolutely gorgeous. You can’t help but fall in love with both Persephone and Hades, and many of the other characters!!

I don’t think it’s diverse (there haven’t been any explicit queer characters and the characters are drawn in like color colors so you can’t tell if there’s a POC), but it’s still so enjoyable. Also, it’s included in the comic, but content warning for rape!

RECOMMEND TO: fans of Greek mythology, fans of (forbidden) romance

I LOVE THIS WEBCOMIC SO MUCH. It’s by the same author of Shoot Around, and I am genuinely so happy every time there’s a new update. It’s about a game where people duel in order to see who will become the heir’s bodyguard. The art style really appeals to me, and the characters are lovable dumb gays and I just have so much fun reading it!!

But it’s a lot more than just a “fun” story; there’s a lot of fighting and action and drama involved. I genuinely cannot think of how else to describe this webcomic except as one of my ultimate favorites, and one that I will love forever. It’s one of those stories you don’t think you’re that into until it’s too late and you’re actually obsessed with it!!!

RECOMMEND TO: fans of The Gays, fans of games/a set of trials, fans of fighting/duels

This was recommended to me first by Ju, which I forgot about, then by Iris, and I binged it in one night! It’s about two boys whose paths intertwine because of a prophecy. I don’t want to say it’s cute, because it really isn’t if you think about it, but whenever I think of this, I just think, “CUTE!!” because one character, Kappa, is the most adorable ever and I love him!!!

Also the gay romance absolutely killed me. The last episode of the first season was just uploaded and now I have to wait like three months for a new update and haha it’s fine not like I need the rest of the story right now or anything.

Aerial Magic is about the apprentice to a witch, and a soft quiet story about what they do every day. It also features a f/f romance (between the witch and another person)! The best thing about this webcomic, though, is that the reading experience is absolutely ethereal, through the combination of the gorgeous art and music. Reading it feels so soothing, and it makes me so happy.

I also enjoyed Always Human by this author, but not as much as this one! Always Human features nanobots and two girls falling in love. I don’t remember much about it, but it’s worth checking out as well! 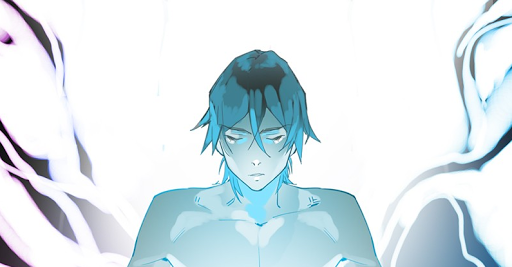 This is a unique webcomic because it’s actually one adapted from a YA book! I ADORED The Fever King, so you can imagine my excitement upon hearing that it would be a webcomic. The art for it is absolutely breathtaking and gets me every time. I already love it so much and I can’t wait to see where else it heads!!

I personally would read the book before the webcomic (obviously, since it’s based on the book, you’ll be spoiling some parts for yourself), but whatever floats your boat! It honestly might be better reading the book first just because the webcomic is still ongoing and you won’t get to read the whole thing in one go.

RECOMMEND TO: fans of… the book obviously, fans of sci-fi/dystopian

I love Heartstopper with my whole heart, but I’m putting it last on this list because I see it on a lot of webcomic rec lists (I feel like it’s a place that a lot of typical YA readers start off, because they like Alice Oseman’s books?), so I wanted to make sure to feature other webcomics!

But I agree that this is a great webcomic to start with if it’s your first time; I’m pretty sure it was my first webcomic too! It’s just an overall fluffy love story between two boys and it’s super cute. It’s definitely a great one to turn to if you’re looking for something to make you happy, because every update always cheers me up!!

do you read webcomics? what are some of your favorites? (PLEASE recommend me some!!) do we share any? do any of these catch your attention?

p.s. not to sound like a broken record player, but I just want to apologize again for my lack of activity lately!! in a few days I’ll be on a week-long break from school, and you’ll hopefully see more of me then. love you all!!