First of all: the cover of this book!!

Though the content inside the book is just as pretty, this cover is genuinely one of the most gorgeous things I’ve ever laid my eyes upon. POC on pretty covers forever please! And especially for books as deserving as A River of Royal Blood!!

As you may know, this book was one of my most anticipated releases for the last half of the year, so I was extremely excited when Penguin reached out to me about being on the blog tour for it! Though it slightly disappointed in the character department, it was made up for through its enchanting worldbuilding and fast-paced plot.

A RIVER OF ROYAL BLOOD

An enthralling debut perfect for fans of Children of Blood and Bone set in a North African-inspired fantasy world where two sisters must fight to the death to win the crown.

Sixteen-year-old Eva is a princess, born with the magick of marrow and blood—a dark and terrible magick that hasn’t been seen for generations in the vibrant but fractured country of Myre. Its last known practitioner was Queen Raina, who toppled the native khimaer royalty and massacred thousands, including her own sister, eight generations ago, thus beginning the Rival Heir tradition. Living in Raina’s long and dark shadow, Eva must now face her older sister, Isa, in a battle to the death if she hopes to ascend to the Ivory Throne—because in the Queendom of Myre only the strongest, most ruthless rulers survive.

When Eva is attacked by an assassin just weeks before the battle with her sister, she discovers there is more to the attempt on her life than meets the eye–and it isn’t just her sister who wants to see her dead. As tensions escalate, Eva is forced to turn to a fey instructor of mythic proportions and a mysterious and handsome khimaer prince for help in growing her magick into something to fear. Because despite the love she still has for her sister, Eva will have to choose: Isa’s death or her own.

Amanda Joy has an MFA from The New School, and lives in Chicago with her dog Luna. You can find her on twitter and Instagram at @amandajoywrites.

Thank you to Penguin for sending me a copy of this book in exchange for a spot on this blog tour! This did not affect my opinions in any way. All quotes are from an advance copy and may differ in final publication.

A River of Royal Blood follows a princess named Eva, who must fight her sister Isa to the death in order to rule the Queendom of Myre. She’s the first person in a century who has had the magick of blood and marrow, and she must learn to control it in order to win the battle.

First of all, I absolutely adore the concept of rival sisters, because it allows for so many different themes to be tackled. And I loved reading how Eva and Isa used to be close but drifted apart as they were forced to be pitted against each other. While I feel like their relationship could have been explored further, it was overall well-executed and that aspect lived up to my expectations.

Eva never really believed she could be queen and basically set herself up for death, but she doesn’t want to die. So she finds someone who teaches her how to control her blood magick, and hone it in preparation to fight her sister. I loved how she battled with herself about the morality of killing vs. the need to keep herself alive, and in general, she was a character worth reading and loving!

Even if I had to become the wicked girl of my nightmares, a maelstrom of marrow and blood, I would do whatever it took to stay alive.

Other side characters also added to the book: Falun, long-time friend of Eva, Baccha, her blood magick teacher and the mysterious Lord of the Hunt, Aketo, the beautiful prince of an oppressed race, and Anali, the captain of Eva’s guard. However, I definitely think that this is more of an action-packed, plot-focused story than a character-driven one!

One of my favorite parts in the book was the inclusion of the stories recounting the history of how this world of magick came to be. They were written so beautifully, and were sprinkled in just the right places. Plus, the way they were told (along with the memories to Eva’s past) helped feel like the story was building up to something. 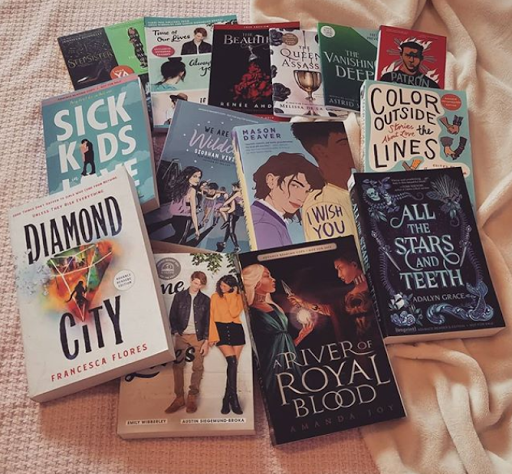 Perhaps the most captivating thing was all the magick that this world included. Honestly, the entire fantasy world was fascinating too, and I say that as someone who’s not usually one for worldbuilding or setting. Another shining highlight of this novel was its interwoven themes of power and identity, and most of all, erasure. The discussion of how the history of one race was erased draws parallels to colonization and supremacy, and it was so, so well-written.

Unfortunately, the beginning started off a bit roughly for me. Objectively I could tell that things were happening to move the plot forward, but it just felt like the author was trying to set too much up in the beginning of the story. For me, there were too many looks into character backstories and worldbuilding in the beginning; once things continued, those became a lot more enjoyable for me!

I think the biggest thing that prevented me from enjoying this more, though, was the lack of proper development of the characters’ relationships. Things were told to the reader, but not everything was actually shown, so the connections between characters seemed off and almost manufactured. That being said, it improved a lot over the course of the story as they got to know one another more! Once I moved past the first 100 pages, I didn’t want to put it down.

That being said, I still enjoyed reading the book: It was dark and thrilling, and the fantasy world that Joy came up with is so enthralling. If you don’t mind less development of character relationships in favor of intriguing worldbuilding and plot, I recommend this enchanting fantasy!

is this book on your TBR? have you read any books with rival siblings?? what dark fantasies have you been loving recently?

14 thoughts on “Blog Tour Review: A River of Royal Blood by Amanda Joy // A Fantasy with a Captivating World, Though Slightly Lacking”