Victoria Lee said I’m gonna give the gays everything they want but also break their hearts a little. as a treat.

Some of you may recall last year when I talked a lot about The Fever King, an epic dystopian-ish sci-fi fantasy about magic and plagues and two boys in love. It’s one of my favorites, so when I was offered the chance to read and review the sequel, I was beyond ecstatic!

Today I’m here to talk about (aka gush over) The Electric Heir. It, as stated, includes gays and heartbreak, and it was the perfect sequel and ending to Noam and Dara’s story.

(Also bonus! You can get The Fever King for 99 cents right now on Kindle US!)

This review is spoiler-free, for both book 1 and book 2.

In the sequel to The Fever King, Noam Álvaro seeks to end tyranny before he becomes a tyrant himself.

Six months after Noam Álvaro helped overthrow the despotic government of Carolinia, the Atlantians have gained citizenship, and Lehrer is chancellor. But despite Lehrer’s image as a progressive humanitarian leader, Noam has finally remembered the truth that Lehrer forced him to forget—that Lehrer is responsible for the deadly magic infection that ravaged Carolinia.

Now that Noam remembers the full extent of Lehrer’s crimes, he’s determined to use his influence with Lehrer to bring him down for good. If Lehrer realizes Noam has evaded his control—and that Noam is plotting against him—Noam’s dead. So he must keep playing the role of Lehrer’s protégé until he can steal enough vaccine to stop the virus.

Meanwhile Dara Shirazi returns to Carolinia, his magic stripped by the same vaccine that saved his life. But Dara’s attempts to ally himself with Noam prove that their methods for defeating Lehrer are violently misaligned. Dara fears Noam has only gotten himself more deeply entangled in Lehrer’s web. Sooner or later, playing double agent might cost Noam his life.

Thank you to Amazon for a copy of this book in exchange for an honest review! This did not my affect my opinion in any way.

The Feverwake series centers around Noam and Dara, two boys who survived a virus that turned them into witchings, giving them the possession of powerful magic. The Electric Heir, like The Fever King, is without a doubt absolutely electrifying (pun fully intended). It’s certainly darker, and much more difficult to read, but it’s also so much harder to put down, even for one minute, and not think or care about the characters.

The Electric Heir takes place six months after the events of the first book, and I can’t say much without spoiling The Fever King, but you jump immediately into the action. I also am allowed to say (meaning: it is not a spoiler) that there was one moment in the beginning when I thought Dara was dead even though my brain KNEW that the author had tweeted that Dara’s POV was included and therefore he could not be dead. I’m an idiot confirmed!

You can tell from the start that The Electric Heir is going to be a little less action-packed than the first book, and I loved it. It, while still full of thrilling events, puts more of a focus on growth and recovery, especially in terms of abuse and trauma, as well as Noam and Dara’s !!relationship!!

Noam and Dara both had POVs in The Electric Heir, and oh my god, I loved it. Dara Shirazi is a character I don’t think I’ll ever stop caring about, and including his POV was a genius idea. Seeing both of them try to save Carolinia, each other, and themselves was a breathtaking, difficult journey, and it made their ending all the more sweeter.

Noam, on one hand, is grappling with abuse without even realizing it for what it is, forced into a relationship with Lehrer. And Dara is trying to heal from his own trauma and abuse, while also trying to help Noam see, as Dara also was once blind to, the abuse he’s experiencing.

“Things like that, when you’re a teenager, and especially with people in power… they aren’t consensual. They can’t be, by definition. I know you don’t want to hear it, and maybe it’s easier to believe you chose this, but that’s not how any of this works.” 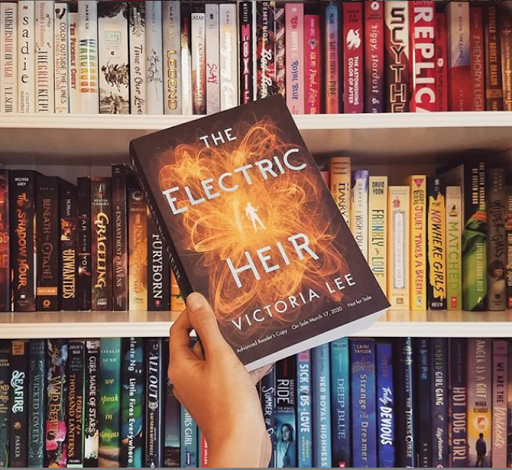 One of my wishes for the first book was that it had just a bit more worldbuilding, and The Electric Heir delivered on that! We got to visit Texas (my lovely gun-filled homophobic home) and also see more perspectives that the world has on Carolinia.

And somehow, even after Noam and Dara actually got together in the first book after enduring a long slowburn, things hurt even more when it comes to their relationship? It’s like, yeah they’re kissing but ow it hurts [for reasons that will remain redacted]. Thank you Victoria Lee, I really needed that pain on top of all the other pain!!

In general, though, it was fully engaging and unputdownable. When I read this, I was struggling to stay up past like 1 or 2 except for school-related reasons, and I remember one night I just kept reading until it was around 3:30 and even then I wanted to keep going.

“I want to choose you,” Noam said softly. “Every day, again and again.”

If you can, I fully recommend picking up this book and/or series. It’s utterly thrilling and entertaining, and more than anything it’s about two characters learning how to survive.  Victoria Lee said, “The Electric Heir is, at its core, about what it means to be a survivor—both the experience of surviving, and the expectations that society places on survivors.” And this shines through, crafting a truly poignant masterpiece.

have you read The Fever King (or The Electric Heir)? what did you think? do you have any recommendations for books that explore abuse? or any sci-fi fantasy books?

12 thoughts on “ARC Review: The Electric Heir by Victoria Lee // A Poignant Story of Survivors”