For once I am here today not to love an Asian fantasy but… to hate on it.

(The crying in the distance is me! It is always me but especially today!)

I was so very excited to read The Mermaid, the Witch, and the Sea, and things actually started out well in the first few 100 or so pages! But then it took a turn for the worst and I ended up disliking it a lot more than I enjoyed it.

So I’m here today to talk about the things I did and didn’t like about this book! (There’s a lot more I didn’t like, of course.) I rarely hate the ARCs I get so I feel kind of terrible about not liking this one, but I received it for reviewing purposes and review I shall!!

THE MERMAID, THE WTICH, AND THE SEA

A desperate orphan turned pirate and a rebellious Imperial daughter find a connection on the high seas in a world divided by colonialism and threaded with magic.

Aboard the pirate ship Dove, Flora the girl takes on the identity of Florian the man to earn the respect and protection of the crew. For Flora, former starving urchin, the brutal life of a pirate is about survival: don’t trust, don’t stick out, and don’t feel. But on this voyage, as the pirates prepare to sell their unsuspecting passengers into slavery, Flora is drawn to the Lady Evelyn Hasegawa, who is en route to a dreaded arranged marriage with her own casket in tow. Flora doesn’t expect to be taken under Evelyn’s wing, and Evelyn doesn’t expect to find such a deep bond with the pirate Florian.

Soon the unlikely pair set in motion a wild escape that will free a captured mermaid (coveted for her blood, which causes men to have visions and lose memories) and involve the mysterious Pirate Supreme, an opportunistic witch, and the all-encompassing Sea itself.

The Mermaid, the Witch, and the Sea follows a pirate named Flora/Florian and an aristocratic lady named Evelyn. Their paths intertwine on the Dove, a pirate ship, and when they fall in love, they must escape, deal with witches, the Sea, spies, mermaids, and more.

It is with a heavy heart that I must admit that the face in the sea on the cover—which I will never stop pointing out, by the way—is exactly what I look like right now: sad, vaguely whiny-looking, and most of all, ugly. (That’s in general, though, not from the book.)

The more power they gave, the higher the price. That was their power, but it was their burden as well.

I’m going to start out with the positives! Because I’d like to begin on a good note before I start, you know, completely dissing it.

This book has a lot of good commentary on colonialism, imperialism, and misogyny! The setting is inspired by our world, specifically as Japan being the colonizer/imperialist force. It also has some great representation, with a Japanese-inspired sapphic main character and a Black genderfluid main character!

I also was not expecting this to be a story on the darker side—and I loved it!!! (Whatever that means about me… we are ignoring that.) I enjoyed the aspects of the world where the Sea is a protective, vengeful force, like a mother, and the different, fun stories told about witchcraft.

Unfortunately, that’s pretty much it for everything I liked.

“I have loved you.” She smiled, a quirk of her tremulous lips. “That is enough.” 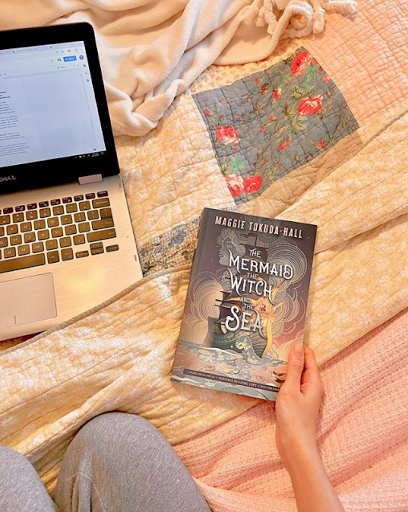 My first problem with The Mermaid, the Witch, and the Sea is that the romance is woefully underdeveloped. In my notes, I wrote “their relationship was like: [rich girl teaches pirate how to read] BAM they’re in love” and… I am not wrong.

The romance was a big part of the story, and it was in fact a large motivator for both of the main characters. So it was disconcerting when their relationship was written with a lot of finality and gravity when we had only seen them have Full Conversations approximately six times.

My second problem, which I noticed when I was about halfway through the book, was that I… didn’t really care about the characters? In fact, when there were side characters whose POVs were included near the end, I was more invested in them than the actual protagonists. Which is an issue, to say the least!!

I liked Flora and I thought her backstory and arc were both great, but I didn’t care a lot for Evelyn. And the ending is definitely supposed to make you feel emotion or touch you in some way, but I read the entire thing with an absolutely straight face because I 1) didn’t care, and 2) just wanted to be DONE with the book.

The pacing was also terribly, weirdly off. The book is divided into three different parts, and it felt like each had their own separate mini arcs that didn’t mesh well together as one overall plot. For example, in the second part, witchcraft was introduced and it was actually so cool and one of the only things I was interested in reading. But nothing happened to it… like it was introduced and then used only two times… so what was the point…

The middle of the book suffered from boring-dragging-middle syndrome, and the ending was rushed, which made the events that occurred feel tacky. I also hated how Florian’s love for his brother was made to be really important but then was also thrown away so many times. And I also didn’t like how a lot of things were left unresolved, it felt like lazy writing!!

Overall, I’m quite sad that I didn’t love this book. It had a lot of potential, especially with the messages and representation it offered. But it lacked in a lot of areas, notably the characters, romance, and the plot itself. I really wish I loved this at much as I love the cover, but alas! I am but a moaning face in the sea. :o)

are you planning on reading this book? what books involving pirates or mermaids or witches do you enjoy reading? have you read any books with a genderfluid main character? (if so, please rec me! i am sorely missing out on them)

25 thoughts on “ARC Review: The Mermaid, The Witch, and The Sea by Maggie Tokuda-Hall // The Sad Face on the Cover is Me”