I’m back with another Asian fantasy to push on to you!

I am so excited to be here today to talk about and review The Bone Shard Daughter, which was one of my most anticipated releases of the year. While it was not what I expected, I loved it so much and I can’t wait to see others fall in love with it too! (And I’ll say after being disappointed by several Asian fantasies this year, I am beyond happy this was quite an exception.

Thank you so much to Kate for making it possible for me to have received an ARC of this book and be a part of this blog tour!

In an empire controlled by bone shard magic, Lin, the former heir to the emperor will fight to reclaim her magic and her place on the throne. The Bone Shard Daughter marks the debut of a major new voice in epic fantasy.

The emperor’s reign has lasted for decades, his mastery of bone shard magic powering the animal-like constructs that maintain law and order. But now his rule is failing, and revolution is sweeping across the Empire’s many islands.

Lin is the emperor’s daughter and spends her days trapped in a palace of locked doors and dark secrets. When her father refuses to recognise her as heir to the throne, she vows to prove her worth by mastering the forbidden art of bone shard magic.

Yet such power carries a great cost, and when the revolution reaches the gates of the palace, Lin must decide how far she is willing to go to claim her birthright—and save her people.

Thank you to Orbit for sending me a copy of this book in exchange for a spot on this blog tour! This did not affect my opinions in any way.

Andrea Stewart is the daughter of immigrants, and was raised in a number of places across the United States. Her parents always emphasized science and education, so she spent her childhood immersed in Star Trek and odd-smelling library books.

When her (admittedly ambitious) dreams of becoming a dragon slayer didn’t pan out, she instead turned to writing books. She now lives in sunny California, and in addition to writing, can be found herding cats, looking at birds, and falling down research rabbit holes.

The Bone Shard Daughter tells the story of Lin, the daughter of the Emperor who cannot remember a semblance of her life before five years ago, and Jovis, a wanted smuggler on a fruitless search for his lover who’s been missing for seven years. It also follows three other characters—Phalue, Ranami, and Sand—whose paths weave intricately with the others to create an overall compelling narrative.

This book was not at all what I expected it to be, but I was not disappointed. Set in a world where animal-like constructs are brought to life with the destructive bone shard magic that drains the lives of the Empire’s citizens, it is an immersive story that becomes more and more chilling as it explores magic, memory, privilege, and, most of all, power.

I wished I did remember. Was there a time when this man stroked my hair and kissed my forehead? Had he loved me before I’d forgotten, when I’d been whole and unbroken?

This book is told in multiple points of views—Lin and Jovis in first person, and the others in third. I know this may sound intimidating to some, especially the switch in first and third person, but it was done seamlessly, and I loved how each perspective slowly wove together in a grand tapestry.

Of the two more central characters, I thought Lin to be the most narratively interesting. After losing her memories, her father has never deemed her worthy enough to start learning bone shard magic. She learns it herself, determined to prove her value, and that she deserves the throne. While she questions herself, especially after a certain event, she is always sure of her place and worth beyond whatever her father believes. 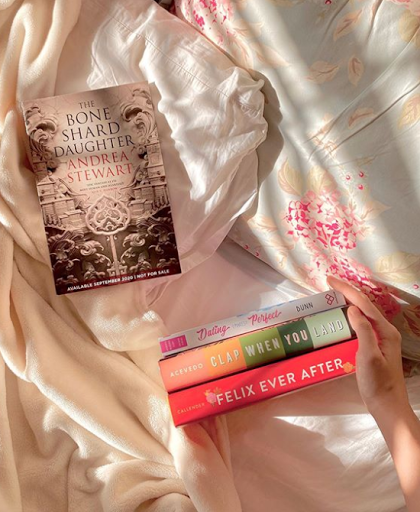 But I also adored Jovis. He’s a tired, grumpy, and highly skilled smuggler who “works alone” and “doesn’t need anyone” after his wife went missing 7 years ago. I absolutely loved reading the growth he goes through, helped along by the quiet, steady companionship of Mephi, a talking magical animal creature who slowly gets him to open up. We aren’t sure what type of animal he is, but know that he is the best creature to ever exist. And yes, I may have teared up over a scene involving him… look away.

Phalue and Ranami were also both fascinating characters to read about. I wish they had gotten a bit more page time, actually, though I’m hopeful we’ll see more of them in the coming sequels! Their chapters explore classism and the privilege (and ignorance) that comes with socioeconomic status. This conflict of Phalue being the governor’s daughter versus Ranami who grew up on the streets, backdropped by a sweet, loving (sapphic!) relationship, made their story so enticing to read.

And finally, Sand’s chapters were some of my favorites to read, though they appeared the least throughout the book. Sand has forgotten everything about her life before now, where she moves through her day in a fog, on an island full of other people with lost memories. I wanted to know everything about her, and the reveal did not disappoint.

“No.” Mephi rested his chin on my shoulder. “Not lonely. I am here with you.”

The whole book feels like buildup, which I know to some may sound off-putting. But it is truly excellent buildup, interesting and engaging and riveting. I think what also really worked for me was this sense of foreboding and suspense that hung over me the entire book. I knew twists would be coming and reveals would be made, and I couldn’t stop making theories and guesses about where it would head.

Stewart’s writing is absolutely lovely—so easily readable and gripping that it feels like sand slipping through your fingers, the feeling of slicing smoothly through water. I would definitely recommend this book to any readers who are seeking to dip their toes in adult fantasy but might be intimidated by the genre; the prose is beautiful not in a dense, flowery way but a simple, subtly captivating way. 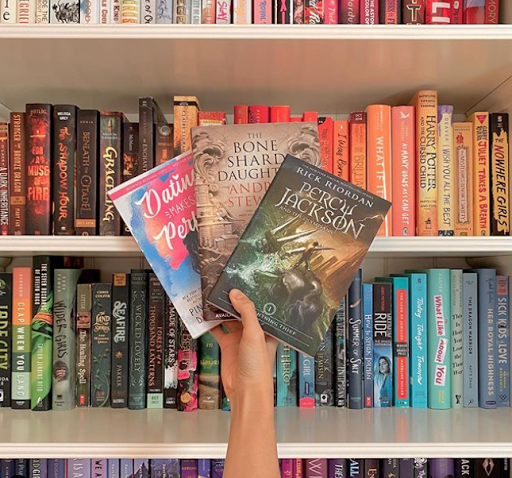 However, I think some readers will be put off by the slower pacing of this book. I won’t deny that I really felt it and the way the plot inched along, particularly in the beginning. For me, though, my investment in the characters, combined with Andrea’s easy writing, made it go by smoothly. It was unputdownable: I ached to know more about each intriguing whisper of a plot twist, and it simultaneously felt like a well-loved quilt being patched together and also a ball of yarn slowly unfurling to create a shape.

Speaking of the plot twists—god, they were so good. I think some of them are fairly predictable, but there were just so many that I feel like there has to be at least one you don’t see coming. (I certainly was fooled by one.) The layers of some of them invite so many questions, and while the book does not end on a painful cliffhanger, you certainly will find yourself hungry for next book already.

“It’s hard to remake one’s view of the world, to admit to complacency. I thought remaking myself for you was hard enough, but doing that was something I wanted. I didn’t want to realize how much I’ve hurt the people around me, and that’s what confronting my beliefs meant. We all tell ourselves stories of who we are, and in my mind, I was always the hero. But I wasn’t. Not in all the ways I should have been.”

My friend Ellie said that this book feels like a set-up for book 2, and I agree! I think this book sets a great foundation for the sequel to expand on, especially with the worldbuliding. I really loved how we were fed bits of information about the setting a few at a time, and each thing only made me more intrigued, especially with the idea of floating islands that can drown, and the mysterious, elusive Alangi civilization.

This was truly such a solid adult fantasy debut, brimming with magic and secrets. If you can handle the slower pacing, I would definitely recommend this, for well-written complex character arcs, a plot that unravels deliciously, and of course, a magical animal companion that will steal your heart instantly. I can’t wait to see what brilliant story Stewart manages to construct (no pun intended) with these characters next.

Small note: This was marketed to me as a book with a f/f relationship and a book similar to The Poppy War, and both of these made me even more excited to read it. However, the f/f relationship was not as central as I’d believed it to be, and there was no comparison I could draw between TBSD and TPW, besides the East Asian inspirations/authors and inclusion of politics. This doesn’t mean I was disappointed or thought the book was bad or didn’t like the f/f relationship; I just want to note for readers that the f/f relationship isn’t central and the book is nothing like TPW, so they don’t go in with incorrect expectations like I did!

:: content warnings :: violence, death of loved ones (off-page), missing loved one, depictions of blood, cutting into skin (not self-harm), drowning

are you excited to read The Bone Shard Daughter? have you read any chilling or gripping fantasies lately? can you guess plot twists easily? (I… cannot)