As a picky reader, it is rare for me to find favorite books.

I can say without a doubt, though, that She Who Became the Sun is absolutely making my best of 2021 list, and near the top of it. It hit on so many of my personal tastes (morally grey gaysian characters is my form of heaven!), and there are truly endless things to love about it. And I can’t describe the joy of finding a new favorite book and not being the slightest bit disappointed after holding high expectations for it!!

Today I have a review of She Who Became the Sun, to do my best to convince you to pick this up! If the hype hasn’t already made you interested in it, I hope this review will, because all the praise you’ve heard for this book is completely deserved.

SHE WHO BECAME THE SUN 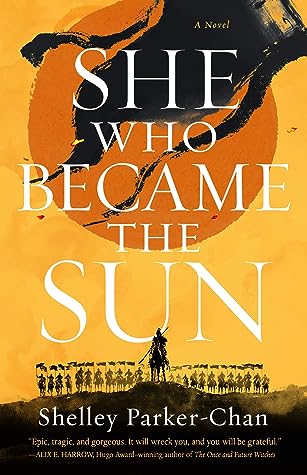 In a famine-stricken village on a dusty yellow plain, two children are given two fates. A boy, greatness. A girl, nothingness…

In 1345, China lies under harsh Mongol rule. For the starving peasants of the Central Plains, greatness is something found only in stories. When the Zhu family’s eighth-born son, Zhu Chongba, is given a fate of greatness, everyone is mystified as to how it will come to pass. The fate of nothingness received by the family’s clever and capable second daughter, on the other hand, is only as expected.

When a bandit attack orphans the two children, though, it is Zhu Chongba who succumbs to despair and dies. Desperate to escape her own fated death, the girl uses her brother’s identity to enter a monastery as a young male novice. There, propelled by her burning desire to survive, Zhu learns she is capable of doing whatever it takes, no matter how callous, to stay hidden from her fate.

After her sanctuary is destroyed for supporting the rebellion against Mongol rule, Zhu takes the chance to claim another future altogether: her brother’s abandoned greatness.

Thank you to Tor for sending me a copy of this book in exchange for an honest review. This did not affect my opinion in any way.

Just from reading the first few chapters of She Who Became the Sun, I could tell it would become an instant favorite. And it quickly did, with its reprehensible yet loveable characters and devastating finish. A tale dipped in tragedy and written in exquisite prose, this historical fantasy is epic in all sense of the word; it will captivate you with its intricate character work and unpacking of destiny and gender, and then break your heart.

She Who Became the Sun follows Zhu Chongba as the reimagined emperor of the Ming dynasty rising to power. As a peasant girl, she is fated to amount to nothing, until her brother dies and she snatches the opportunity to cloak herself in his identity and take his own destiny of greatness. She soon becomes a monk and slowly climbs the ranks of the rebel army against the Mongols, thrust into a world of slippery politics, betrayals, and high-stakes battles.

Desire is the cause of all suffering. The greater the desire, the greater the suffering, and now she desired greatness itself. With all her will, she directed the thought to Heaven and the watching statues: Whatever suffering it takes, I can bear it. 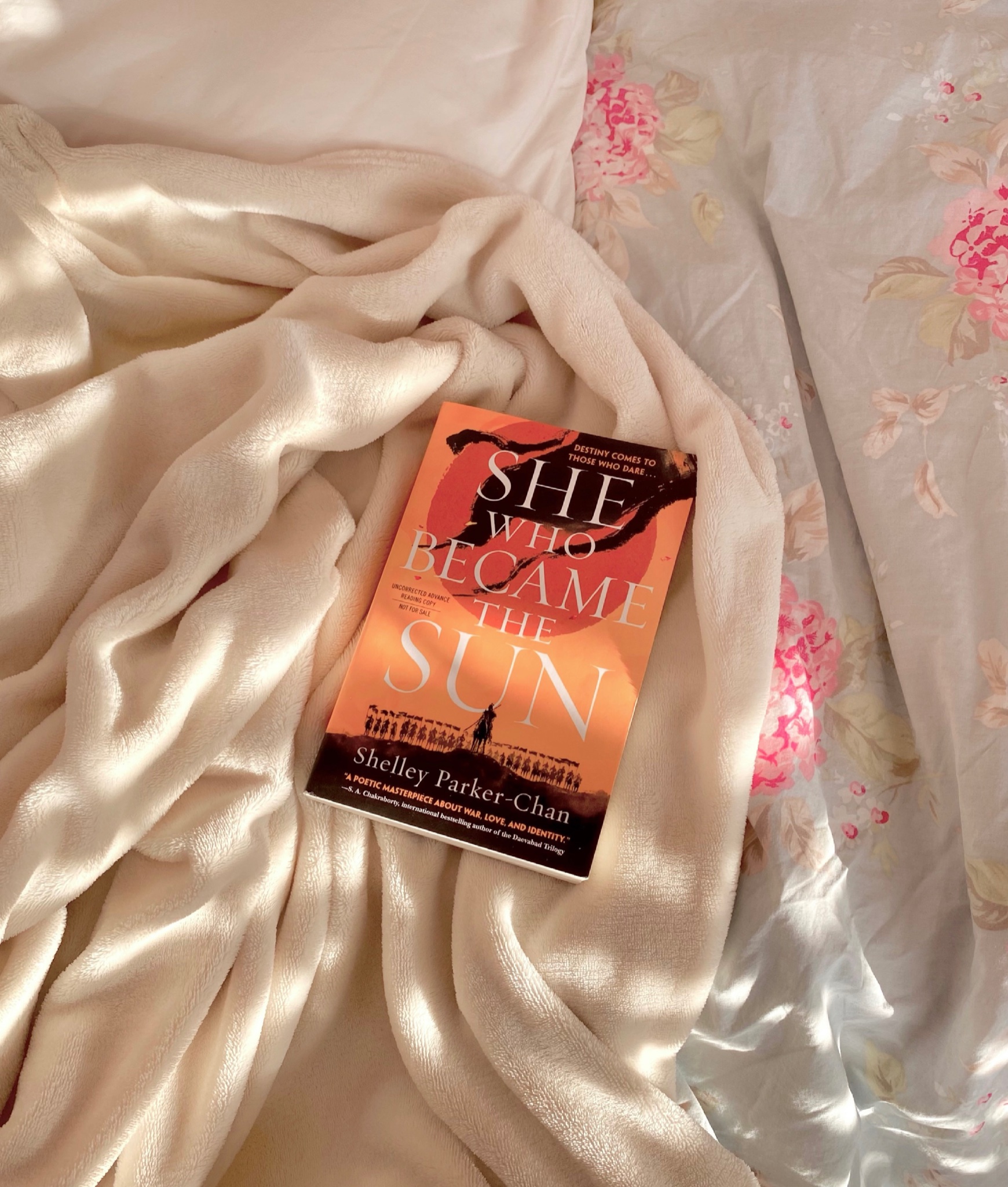 So much of She Who Became the Sun is brilliant, particularly its characters. Though Zhu and Ouyang are certainly morally questionable and wretched, and they commit terrible acts, Parker-Chan manages to make you root for them. It’s an even more impressive feat considering that you want both of them to succeed, though they are on opposing sides of a war and it will inevitably result in defeat. The exploration of themes like destiny and ambition through their arcs is careful and complex, and if the plot is slow-moving at times, you are never once allowed to hold your breath as you watch the characters evolve.

Zhu’s ambitions of greatness manifest from an intense desire to live and transform into a ruthless determination to achieve what she wants, no matter the cost. It’s riveting to watch her move through the story, to watch her grow in power and hunger, and though you sense that she is slowly falling into corruption, you still can’t help but be awed by her cunningness and want her to reach her goals. Her relationship with Ma was also a delight for me; I found it so sweet, and the ending made me incredibly excited to see what direction their romance will head.

Ouyang, on the other hand, is the eunuch general of the Mongol army driven by his perceived need for revenge against the family who stole his own family from him. And even though he is a raging misogynist… I love him! He is such a tragic figure, repulsed by himself, his body, and his longing for Esen (a result of internalized homophobia but also how he is supposed to hate Esen), and it makes for such compelling anguish in a character. The romance—more like extreme tension and yearning—between him and Esen was honestly torment to read but only exacerbated Ouyang’s internal struggles.

She saw someone who seemed neither male nor female, but another substance entirely: something wholly and powerfully of its own kind. The promise of difference, made real.

She Who Became the Sun is immense in all it encompasses. It builds an expansive world and sets up intricate politics, and the scheming and backstabbing are just as exciting to read as the epic battles. It also takes on several themes like destiny, choice, power, ambition, and gender. The premise of this book with Zhu having to be her brother to realize her ambitions works so well for studying Zhu’s relationship with her gender, and Ouyang’s feelings about gender intersect brilliantly with his self-hatred tied to his castration. There is a beautiful questioning of what gender is in relation to all the ways it is expected to be performed and how it is perceived, within a patriarchal historical setting. 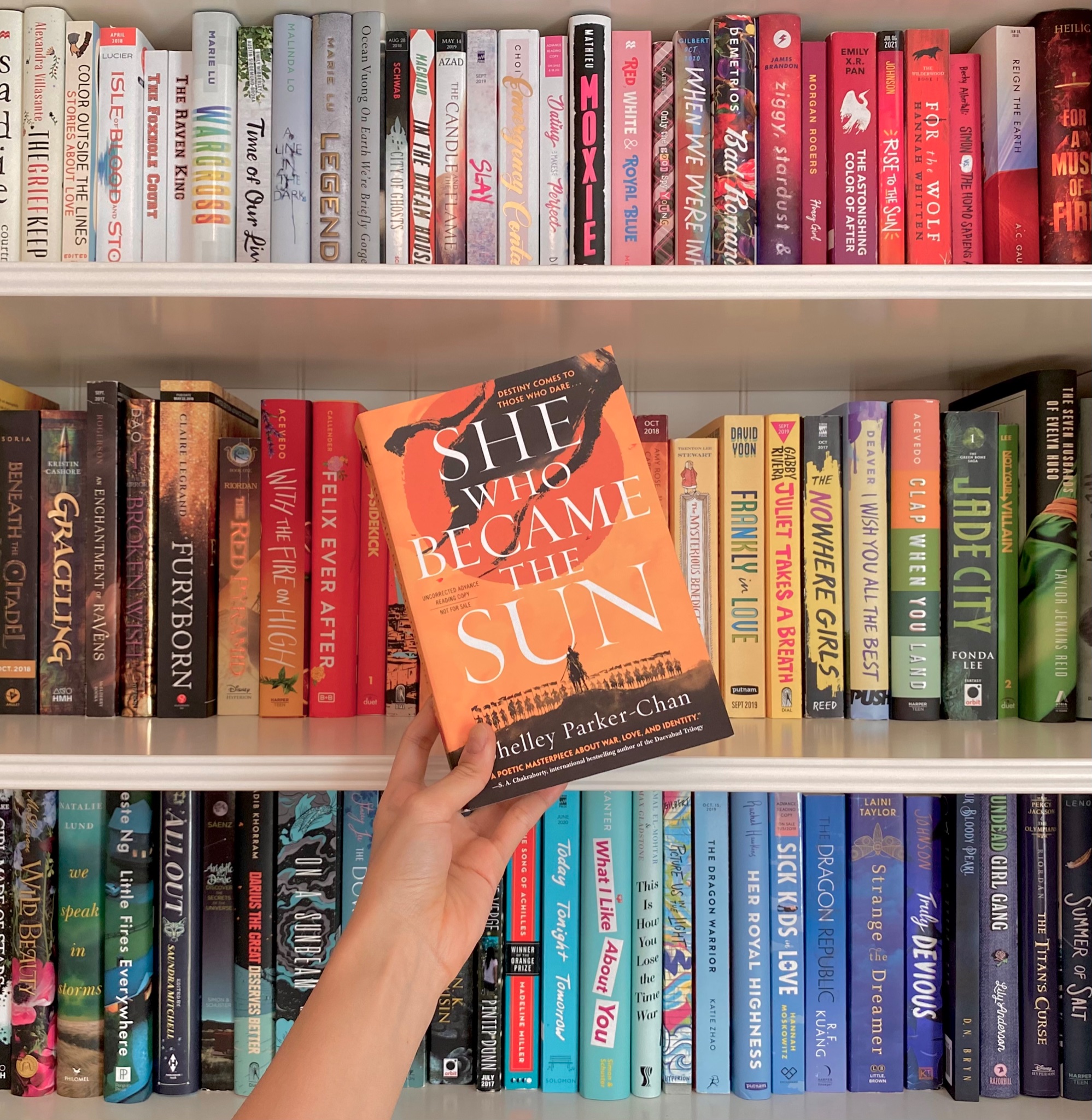 Perhaps the largest theme throughout the book is destiny, and it is genius how it is portrayed through Zhu and Ouyang as foils to each other. Zhu chases after destiny, one that wasn’t hers but she will force to be, unwilling to let anything or anyone but herself dictate her fate. Ouyang, on the other hand, lets himself be shackled by his history and the revenge he believes he is supposed to carry out, however miserable it makes him. Thus, She Who Became the Sun explores the weight of destiny compared to personal desires, asking if individual choices, actions, and willpower can defy fate. It never lands on a definitive answer, instead portraying the costs both Zhu and Ouyang must pay because of their destinies.

Nobody will ever end me. I’ll be so great that no one will be able to touch me, or come near me, for fear of becoming nothing.

While the book is certainly something to savor and let seep into you slowly, She Who Became the Sun does an expert job of building up tension and suspense. Throughout the book, you get the sense that something monumental will happen, that it will be tragic too, and yet even if you think you’re ready for the ending, it still manages to shock you and hit you hard. All the buildup leads to satisfying—and painful—payoff and sets up excellently for the sequel. Though I wouldn’t say the comparison to The Song of Achilles is perfect, you can certainly see why it was made by the end, meaning: you will still be thinking in agony about the ending months after you finish.

If you like books with multifaceted morally grey characters, romance equal parts yearning and angst, or studies of power, revenge, and ambition, you absolutely need to read this. She Who Became the Sun is undoubtedly radiant and a new force to be reckoned with in the historical fantasy genre, and I am in awe of everything Parker-Chan managed to masterfully tackle in her debut book. Pick this up, feel my lingering pain and astonishment, and join me in the agonizing wait for the sequel.

are you going to read She Who Became the Sun? what are your thoughts if you’ve already read it? favorite fantasies with morally grey characters?

25 thoughts on “ARC Review: She Who Became the Sun by Shelley Parker-Chan // A Radiant Fantasy about Destiny and Gender”